Farmer Protests In India: A Movement for Democratic Control of the Food System 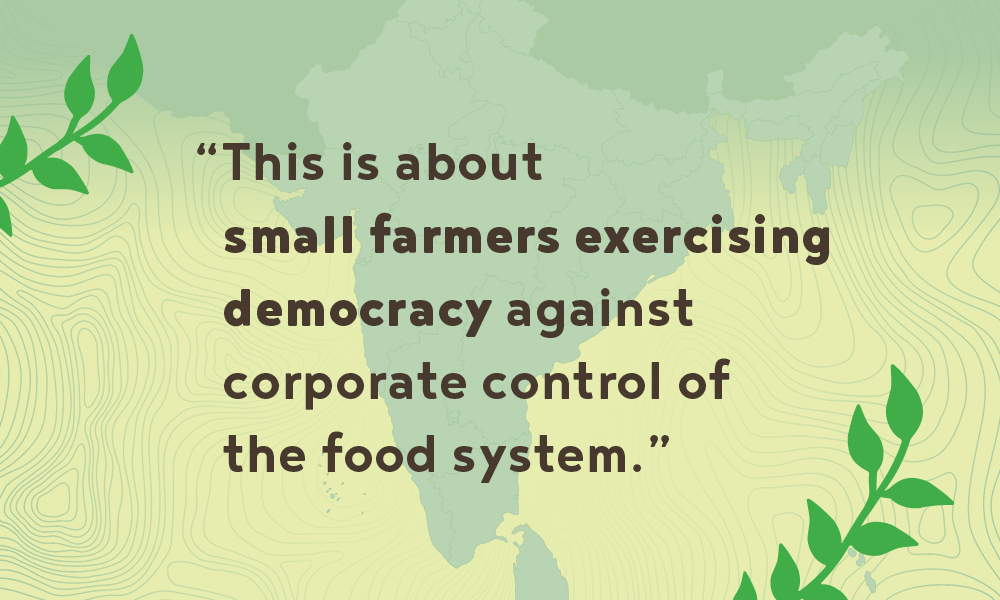 The largest protest in human history has coalesced in India around the passing of three new agrarian bills that farmers fear will devastate their livelihoods. The new bills passed in September 2020 aim to deregulate the agricultural market and open the sector to increased corporate control. In protest, hundreds of thousands of farmers arrived at the border of the capital, Delhi, in November 2020 in trailers and tractors, accompanied by provisions to remain in place for months to come, demanding that the government repeal these laws.

Over half of India’s 1.3 billion people are involved in agriculture, with a majority of those classified as small farmers.1

What do the farm bills propose?

Collectively, the three agricultural bills aim to alter the landscape of the Indian agriculture sector by deregulating the agricultural market. The bills loosen regulation around the purchase, sale, and storage of crops, thereby eliminating essential protections for farmers.

Currently, most farmers sell their crops to government controlled wholesale markets, or mandis, at assured floor prices. Under the new bills, farmers can sell directly to private players, without any guarantee of minimum prices. While initially the private sector could offer competitive prices, farmers fear this will eventually open the door to exploitation at the hands of the private sector. The new bills also remove restrictions on stockpiling commodities and limit litigation avenues in the case of contract breaches by the private sector.

While the government claims that these reforms will modernize the agricultural sector by increasing private sector investment, farmers fear this will come at the cost of their livelihoods.

Where does this stand now?

Three months later, farmers are still camped at the outskirts of Delhi, battling the bitter winter of Northern India. Negotiations between the farmer unions and the national government have yielded no results thus far.

The situation escalated further after a large march on January 26th, India’s Republic Day, resulted in violent clashes with the police. The Indian government has since responded with egregious human rights violations, imprisoning journalists and blocking internet access. The recent escalation has brought this issue to the attention of international groups such as the Human Rights Watch and the United Nation Human Rights Council. The democratic right to peaceful protest is now under threat in India.

Why is this important?

Equal Exchange was founded in 1986 to give small farmers a platform in the global marketplace. 35 years later today, small farmers continue to be exploited at the hand of intermediaries and corporate behemoths. The protest in India is about small farmers exercising democracy against corporate control of the food system, an issue that lies at the core of Equal Exchange.

According to Tomy Mathew from the Fair Trade Alliance Kerala, Equal Exchange’s organic cashews partner in India, the current protests are “a uniquely Fair Trade movement.” As Tomy writes on the Fair World Project blog, “Minimum Support Price is near akin to the Fair Trade Minimum Price in trade justice parlance.” While Fair Trade offers certain protections to farmers, the inequities in the global food landscape are still set up to marginalize small farmers.

The fight for small farmers is a global one, with protests, such as the one in India, having ripple effects across the global food economy. Equal Exchange has always advocated for small farmers having a greater platform within the global food system. This is no different. Equal Exchange stands in solidarity with Indian farmers protesting for democratic control of the food system.