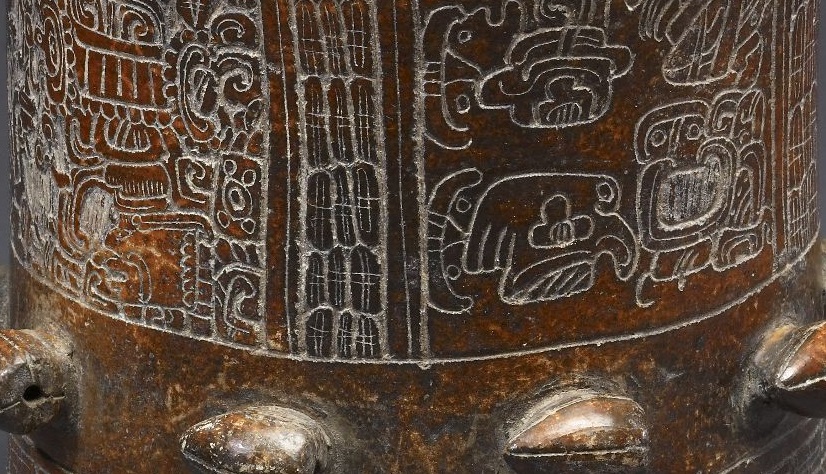 THE ART OF LUXURY

Do you love fine chocolate and cocoa? You’re in good company. Many powerful and discerning people — from Aztecs conquerors in the New World to the Holy Roman Emperor of the Old — were all about it! Men and women have enjoyed this marvelous substance for hundreds of years. And you can tell a lot about a society from the art it leaves behind. Long-ago chocoholics honored their favorite treat with pictures, statues, and beautifully decorated serving dishes.

Mesoamericans began consuming chocolate as early as 500 B.C.E. Their craftspeople created special vessels to prepare and serve it. The Maya drank their chocolate unsweetened, as a paste formed of ground cacao seeds, water, and other ingredients like cornmeal and chili peppers. Some historians believe they consumed it for medicinal purposes. An artisan in around 400 C.E  made the lidded earthenware basin pictured below, in what is today Mexico or Guatemala. The basin would have held the cacao mixture.

Drink of the Gods

Maya people identified chocolate drinks with their deities. In this fascinating scene, painted in Guatemala between 670–750 C.E., the ruler of the Maya underworld sits in state, wearing his owl-trimmed hat. Behind him, one of his female attendants spills out chocolate from a drinking cup. Mayans who prepared the beverage would froth it by pouring it back and forth from a pot to a vessel like the one on which the scene was painted!

Lifestyles of the Rich and Famous

Though Maya of all social classes enjoyed chocolate drinks, elite members of society served these preparations from large urns like the one below. Modeled cacao pods ring the edge, and a cacao tree forms the knob on top of the lid. Glyphs confirm the vessel’s function as a chocolate drinking-cup.  Nobles sometimes gave them as gifts to seal alliances.

Pay Me in Chocolate

The Aztecs mixed their cacao with vanilla, and  drank it cold. After the Aztecs took over much of Mesoamerica, the rich reserved cacao beverages solely for themselves. In fact, in Aztec society, a person of low status drinking chocolate constituted a bad omen! Subject peoples even provided chocolate as tribute. So, it makes a lot of sense that chocolate would show up in Aztec art. Sometime between 1440 and 1521, an artisan crafted the statue below, which depicts a man carrying a cacao pod. The figure is made from volcanic stone.

Chocolate traveled to Europe from the New World via its Spanish colonizers. Members of the court of Charles V became big fans. Because of its distant origin, chocolate was strictly a luxury item. By the 18th century, Europeans prepared and sipped from delicate porcelain cups, like this one. It was made around 1720.

By the time chocolate reached England, it was still a drink, but Europeans began to add milk and sugar to the mix. Because of its expense — and because it made children excitable — only grown folks drank it. This silver chocolate pot was crafted in 1714-1715 and has a hinged finial to admit a swizzle stick called a molinet, used to stir the chocolate. A similar pot bought by a diplomat in 1735 cost a staggering twenty pounds and eighteen shillings!

Chocolate has been delicious for centuries. Enjoy a modern version of this treat, rich with history. Equal Exchange sells a great powdered Baking Cocoa, as well as a traditional Hot Cocoa Mix, a decadent Dark Hot Chocolate Mix, and a more adventurous Spicy Hot Cocoa Mix with cinnamon and cayenne. And all four are always fairly traded and Organic!

If chocolate doesn’t show up in our art too much anymore … well, maybe that’s something we should reconsider!