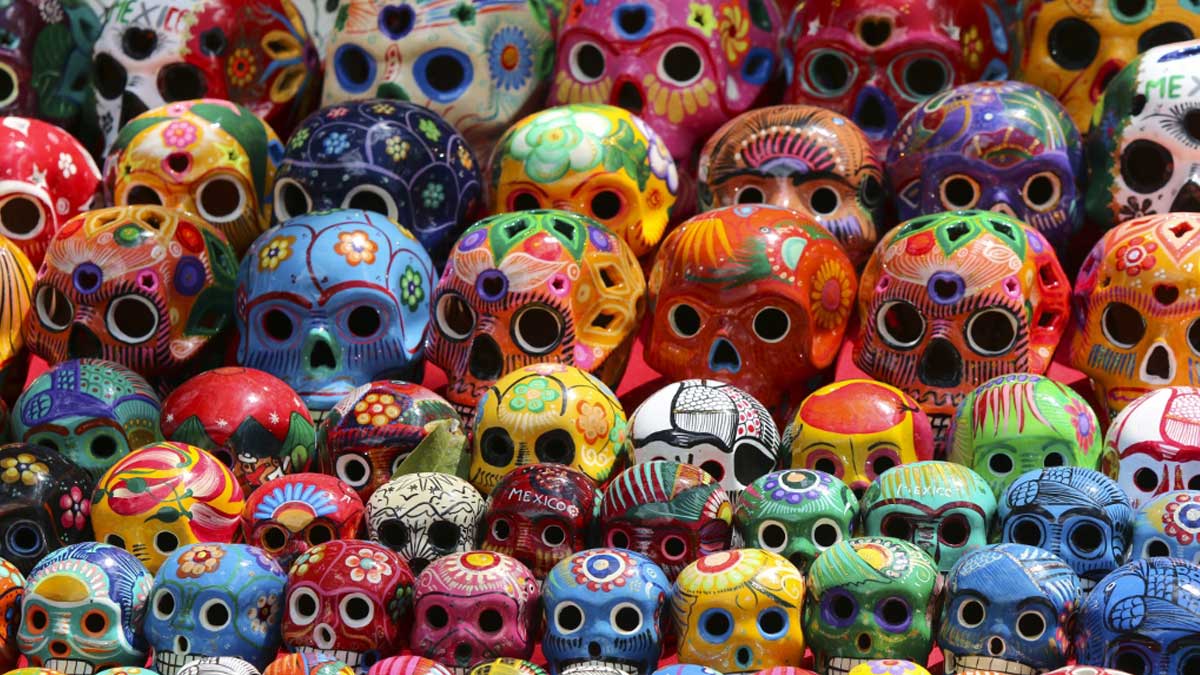 In Mexico (where many of our coffee producer partners are located) and other parts of the Americas, many people are celebrating Día de los Muertos, also known as Day of the Dead! In honor of this holiday, we talked to Equal Exchanger Hope Kolly and her mom, Emma Kolly, about how they celebrate. Hope is based in Austin, Texas, and Emma grew up in Cuernavaca, Mexico, giving us a unique take on traditions in both the U.S. and Mexico.

What is Día de los Muertos about?

Hope:  To me, Día de los Muertos is about remembering friends and loved ones who have died and celebrating those lives and life in general with your friends and family who are still here.  Unlike Halloween, it’s not a scary or creepy holiday but an acknowledgement that death is a part of life and when we remember our loved ones, they continue to live in us.

It comes from a blending of indigenous beliefs of people mostly from southern Mexico and Central America with Christian beliefs spread by European colonizers.  It comes from a time when many indigenous people buried their families under their houses and decorated with their actual skulls to remember them and keep them close and safe.  They believed there was a time (originally in the summer) when spirits could come back to this world to visit so you would help guide them by decorating and lighting candles for them and put out things they liked and things to help them rest from their long journey.  That’s why many ofrendas (altars or offerings) have things like water and cloths to wash up, favorite foods and objects.

Emma: It’s about celebrating life and remembering the people we love that went before us and keeping their memory alive. The first of November is the day to celebrate children and youth who have died, and it’s Día de los Santos (Day of the Saints, sometimes known as Day of the Little Angels, which coincides with the Christian All Saints Day) and the second of November is Día de los Muertos , which is for everyone else. It’s the circle of life.

What does it mean to you?

Hope: For me, a lot of the meaning comes in connecting to my Mexican heritage. I think about the generations before me, unknown because my mom was adopted and there is little in the way of information or documentation about them, but maybe known or felt a little bit through this celebration and ritual. I also feel like it expresses a very culturally particular way of looking at death not as something fearful or not talked about as is so often the case in the U.S. but something that is present, respected and part of the natural cycles and rhythms of life.

What are some traditions? Any that are particularly special to you?

Emma: We traditionally cook things for people that passed away, their favorite things they liked to eat and drink. You take the food to the cemetery or the altar and offer it to the spirits, to come taste what you made, and afterward you eat the food with your family. You also make calaveritas (little sugar skulls) with the names of the deceased written on the skull for the altar or ceremony.  Some people make chascarrillos, which are little sayings, poems or stories about death, making fun, remembering, saying loving words. Sometimes you make them for living people and they’re always fun.

What’s your favorite Day of the Dead tradition?

Hope: My favorites are the Sugar Skulls!  Usually in Mexico you can buy them at the market  and even have them personalize them with the name of a departed loved one but they’re harder to come by in many parts of the U.S. so I started making my own and inviting friends over to decorate them and to share this holiday with folks.  I started this when I moved to New England many years ago — I think I was missing home and was sad that no one seemed to celebrate the Day of the Dead.  Now that I moved back to Texas and closer to family I still like to make them and get my nephew and niece involved.

I also make an ofrenda or altar every year.  I love gathering pictures of my loved ones who have passed, remembering them as I put them out and decorating with papel picado (cut paper flags), flowers, candles, sugar skulls (of course) and treats.  I especially love it if someone is visiting and they ask me about someone on the altar so I can share a story.

Emma: My favorite is that you tell stories about the people that are gone. You share experiences and keep the memory of the person alive. For example, my grandkids don’t know some people who have passed, like my sisters — so I tell them stories about them so they know they existed.

Sometimes the whole town gets together for parades or a party. In small towns everybody invites you to eat what they made — tamales, moles, all kinds of things. You have a lot of drinking. Some people take mariachis to the cemetery and take drinks and cervezas and tequilas… sometimes they go till all hours. Some people take candles and flowers.  Everybody express their own unique way.

Are there differences between the way folks celebrate in the U.S. versus in Mexico?

Hope: I’m more used to what goes on in the U.S. but living in Austin, Texas, I’ve seen many non-hispanic folks embrace the holiday and bring their own spin to it.  Every year there is a Viva la Vida festival and parade to celebrate the Day of the Dead and there are folks dressed up as traditional Catrinas (skeletal fancy ladies) and then there is an Austin Weird category which can be a bit hipster, a bit western or a bit punk rock. I’ve definitely noticed an uptick in sugar skull imagery in decorations over the years.  It’s so great that folks are interested in this holiday, I just hope that they learn about the origin of the celebration and the cultures from which it comes.

Emma: There are some places in Mexico with a tradition of trick-or-treating, too. Little kids go around with a calabacita (little gourd) that they decorate and ask for candy and people sing, “La calavera tengo hambre, no hay un huesito por ahi?” (The skull is hungry, are there no bones for me?) and then they give them a huesito or pan or little treat. It’s not as much as here in the U.S., but some people do it on some streets and kids go and get things.

Hope: I remember when I was about 4 or 5 years old and my family was living in San Antonio, Texas that my parents got us some sugar skulls.  They kept telling us that they are supposed to be decorations and that we shouldn’t eat them but I couldn’t help myself and I started licking the back of the skull when no one was looking.  The next day I noticed that the ants had found my skull so we had to throw them out.  I also learned from the first ofrenda that I did as an adult that you should make sure you remove all the treats and food from the altar overnight if you have a cat.  Unless you like half eaten food and knocked over decorations the next day.

Emma: In my adopted house, we were more into praying and making the altar very simple. My parents were a lot more into the spiritual. And when I got to know my birth mother, I remember the first time I saw my mom and sister doing the altar of the dead — I was amazed! — because they got so much food and flowers. It was like a whole room was tamales and two types of mole, bread and salads — I mean it was like a crazy amount of food and candles and drinks. My mom had a lot of people that passed away and so it was like a humongous feast. I had never seen anything so elaborate. It was a different kind of celebration — different than what I was used to when I was little. But it was equally important and spiritual in their own way. It made me appreciate my roots and upbringing.

Is there anything else that you’d like to share or think that people misunderstand about the holiday?

Emma: I think there is some misunderstanding. I think some people think the holiday venerates death, the kind of dark side, which is not true — it doesn’t come from that. It celebrates life and the ones that are not here and it gives us a better understanding of death.  That it’s just a natural thing that’s going to come, it’s something that you can’t get away from and not to be so afraid of it. It’s sad and it’s hard, but it’s also a part of growing, a part of the circle. And people think, “oh, they get drunk in the cemeteries” and they think it’s like a pagan festival and it’s not — it’s really not. It’s more about spiritual, about connecting to the people that are gone in different ways, and looking for that spiritual togetherness that we always know we have with the people that are living. One of Hope’s homemade sugar skulls.