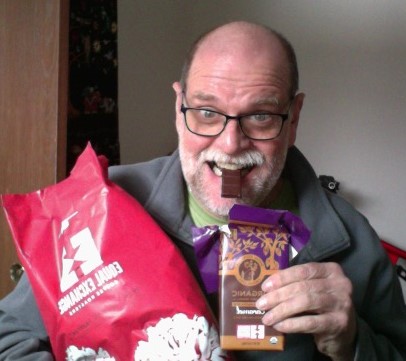 Scott is a scientist and offers Equal Exchange coffee and chocolate self-serve out of his office. People leave checks for him. He also delivers products to other people’s offices. People have learned about his ministry through word of mouth. We interviewed him about his special project.

As a Mennonite, Scott got involved with offering Equal Exchange products because he saw that there were very few ways to get money to poor people in underdeveloped countries. He read about how Catholic Charities was doing good work with cooperatives in Guatemala and turned to Equal Exchange because it worked with small farmer cooperatives. “Most people know that I got into it because of my affiliation with the Mennonite Central Committee (MCC)” he said. “I thought that people would be attracted to the mission more. But mostly they’re interested in the products. The chocolate is so delicious.  They think that it’s the best coffee for the price.”
Scott says that he’s in it “for the right reason. “He doesn’t take a cut or make any money. In fact if anything he loses money because he gives away free samples.  He’s into the mission of supporting small farmers. “It’s special.  because it’s person to person. There’s a relational part to the coffee purchase.” There’s a person he knows who is receiving cancer treatments.  “I keep him in chocolate,” he said.  Scott also sells to a friend who works at a nonprofit for low-income housing. And there’s a woman who supervises a crew which cuts trees and fix lines for Verizon, she brews coffee for the workers which is available in thermoses and bakes for her crew. She buys 30-40 lbs. of coffee at a time.

He and his wife, Sharon,  also bought a couple of cases of the EE organic Palestinian olive oil over the holidays to give as Christmas gifts. Sharon went over to the West Bank several years ago with Christian groups through the Mennonite Church USA.  They both love the taste of the olive oil.

During COVID Scott has kept a stack of products at home. He delivers coffee and chocolate to people’s homes. During COVID it’s been important to give things to folks, he says. “People are stressed, ” he said. “I’m glad that it makes people happy.” His favorite story: A colleague at Corning would come to his office and tell him that he needed chocolate for his wife. The two men worked together, but also saw one another socially.  One day the wife came to the office to buy chocolate and Scott found out that his friend had never given her any of the the chocolate. He meant to, but it never made it home. Now both members of the couple come separately to buy their chocolate and they hide their supply. It’s a running joke.

Scott has really enjoyed sharing EE products with other and spreading the word about the mission. Eventually he will retire, but he’s hoping that someone at work will take it on.  He is an example of an Equal Exchange Advocate Extraordinaire.

If you’d like to share your story with the Equal Exchange community please submit your details here.

Carol Bjelland, a member of the fair trade committee at Ascension Lutheran Church in Thousand…