The Current Storm: The Realities of Climate Change for Cacao Producers 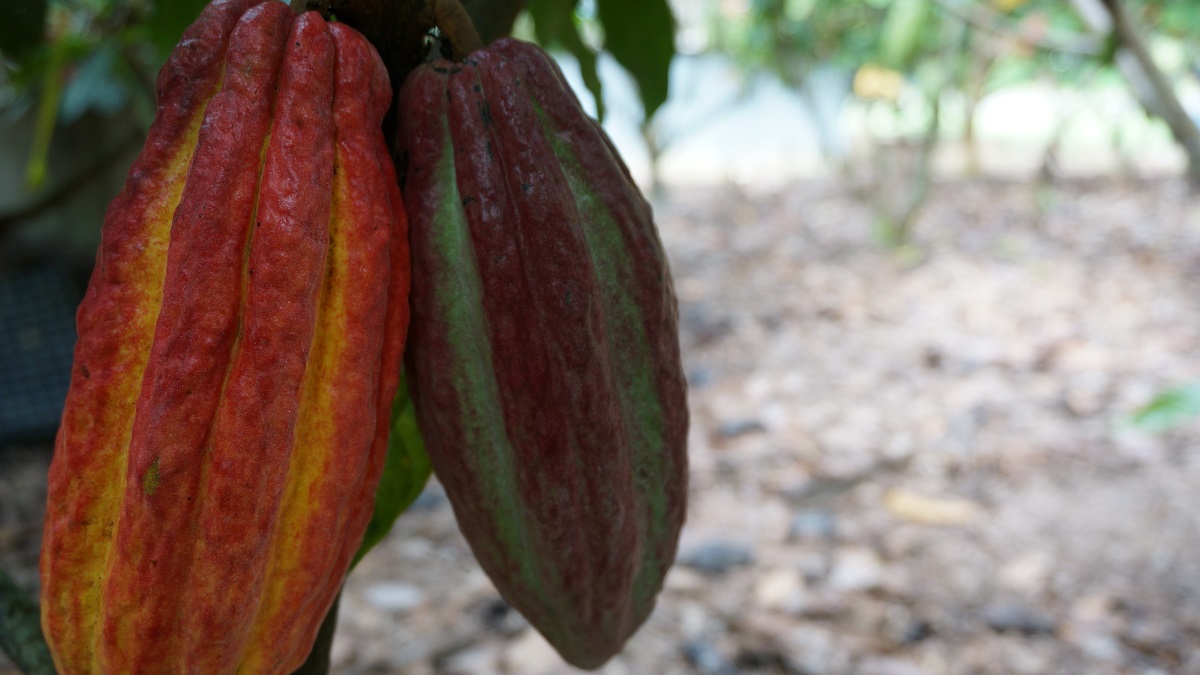 On Thursday October 11th, a group of activists, teachers, friends and allies gathered in the Equal Exchange cafe for a discussion on chocolate and climate change hosted by the Equal Exchange Organizing department. The event, titled, “The Current Storm: The Realities of Climate Change for Cacao Producers,” featured Miriam Elena Maza Asencios and Cesar Salas Garcia from Acopagro in Peru and Abel Fernandez from the CONACADO Co-op in the Dominican Republic. For cacao producers in Central and South America and in other regions around the globe, climate change is already a reality and a significant challenge. “We’ve seen climate change affecting us in terms of prolonged droughts and fires,” Cesar Aide Salas Garcia, president of the ACOPAGRO Co-op in Peru, said (via translator) during the presentation.

Precipitation extremes on both ends of the scale – droughts and flooding – are intensified by climate change. The ACOPAGRO Co-op has dealt with drought and fires in recent years. Cesar showed a picture of a farmer standing in a dried up area that used to be a river.

“We have droughts, and on the other hand we have another problem, which is flooding,” he said. In 2017 the flooding destroyed about 60 percent of the cacao crop and affected 150 members of the co-op. Increased rain also brings about more pests, exacerbating another problem.

With 10,000 producer-members, CONACADO is now the leading supplier of fair-trade cacao in the Dominican Republic, exporting about 17,000 metric tons of cacao per year. Last year, however, the Dominican Republic’s cacao production was down by roughly 30 percent. Climate change impacts – like excessive rain and flooding – are a big reason why. As Abel explained, the rain levels, if high enough, can drench and kill the flowers on cacao plants so they don’t produce. This in turn can throw off the harvesting timetable.

“Normally the cocoa market is managed in advance,” said Abel.  “Climate change has been making that more difficult. Sometimes we cannot meet the deadline for delivery.”

So what are the farmers doing to address these challenges?

Reforestation, is a big part of the solution, because intact forests act as huge carbon sinks absorbing some of the carbon dioxide in the atmosphere that is warming the planet. ACOPAGRO is working to restore virgin forests in the Peruvian Amazon. The co-op currently owns 180,000 hectares of a reserve and is helping to reforest it. From 2012 to 2014, 50,000 metric tons of certified CO2 were captured through this project.

ACOPAGRO is working on crop diversification and is installing 80 hectares of cacao with other agroforestry crops such as sacha inchi, black pepper, fruit trees, timberwood and medicinal plants. Farmers are applying intensive management practices to stay on top of increasing pests.

In the Dominican Republic, cacao producers are finishing up an eight-year project on model farms to practice resiliency techniques such as using organic fertilizer and biochar and deep-soil planting. Production on these model farms has increased by 500 percent.

And yet, challenges still remain, and the impacts of climate change will only worsen. But small-scale cacao farmers are navigating these hurdles and leading the way to find solutions.

“They’re not only having to adapt to the effects of climate change, but they’re doing an incredible job of trying to mitigate the effects for the entire planet,” said Julia Baumgartner, Cooperative Development Program Consultant at Equal Exchange.

The evening closed with questions and reactions from the audience, the room filled with thoughts on carbon capture, mitigation techniques, and actions consumers can take to push for better climate policy in the US.

An attendee and professor at Bridgewater State University, Jame Hayes-Bohanan commented “I learned more about the ways in which cacao farmers are suffering and the effects of an increasingly unstable climate system. I was humbled by the farmers who take on their responsibilities as contributors to climate change with an obligation to reduce their own carbon footprint.”

As Cesar with ACOPAGRO put it, “We can’t sit still and do nothing. We can’t let this [climate change] situation dominate us.” Cesar’s words offer inspiration and urgency for all of us to find ways to make a difference.