The Small Producer Symbol: What Does It Stand For? 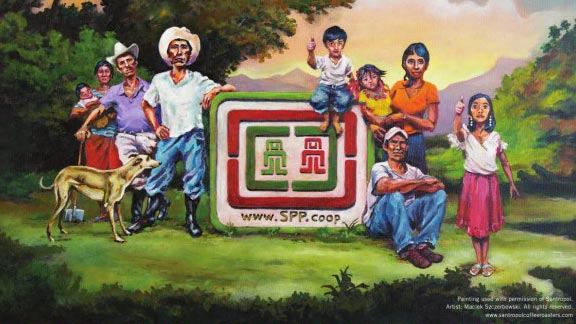 In the last year, you may have noticed a new logo on the package of your coffee: the Small Producer Symbol. The SPP (the acronym of the Spanish name, Simbolo de Pequeños Productores ) is a relatively new certification label that you can now find on many of our coffees and in stores nationwide.

Certification labels help us understand our food choices better, allowing us to make informed decisions about what businesses we want to support based on their practices. At first glance, the SPP symbol may seem like another logo in a sea of logos – but the movement behind it is unique and profound. The SPP is the first Fair Trade farmer-owned certification system, representing the emerging leadership of small farmers in global trade. In a world where certification systems have been defined and controlled by people in the global north, it’s exciting and important that farmers in Latin America are taking control and defining what a just trade system looks like to them.

The need for the SPP emerged as a response to changing Fair Trade certification standards, which have broadened to include coffee and cacao plantations. Many people find this move to be counter to the founding principles that focus on small-scale farmers, who have trouble competing with plantations on the conventional market. In response, the Coordinating Body of Latin America and the Caribbean (CLAC) began strategizing a way to keep Fair Trade fair for small farmers – and the SPP was born. The certification system is run by the nonprofit group the Foundation of Organized Small Producers (FUNDEPPO), who best understand the needs and goals of small farmers like themselves.

So what exactly does the Small Producer Symbol mean for farmers, and how are its standards different from other certifications? SPP standards are comprehensive, and include 50 criteria for small farmer member organizations, including maximum individual farm sizes and a maximum percentage of farm work performed by hired help. This means that plantations and large-scale operations are excluded from SPP certification. Buyers who use the SPP label, like Equal Exchange, must meet nearly three dozen criteria, including a minimum of five percent annual volume growth in program purchases. This means that buyers are committed to supporting the farmers of the SPP long-term. And most importantly, the SPP is run and governed by farmers themselves.

We’re proud and excited to support the Small Producer Symbol and the farmer-led movement it represents. We hope you’ll join us in supporting the SPP by spreading the word, seeking out the logo when you shop and choosing to brew the coffee that represents authentic Fair Trade.

Find SPP coffee on our webstore

A Call for Justice in the DRC

In 2019, Dr. Denis Mukwege won the Nobel Peace Prize for his work with survivors…