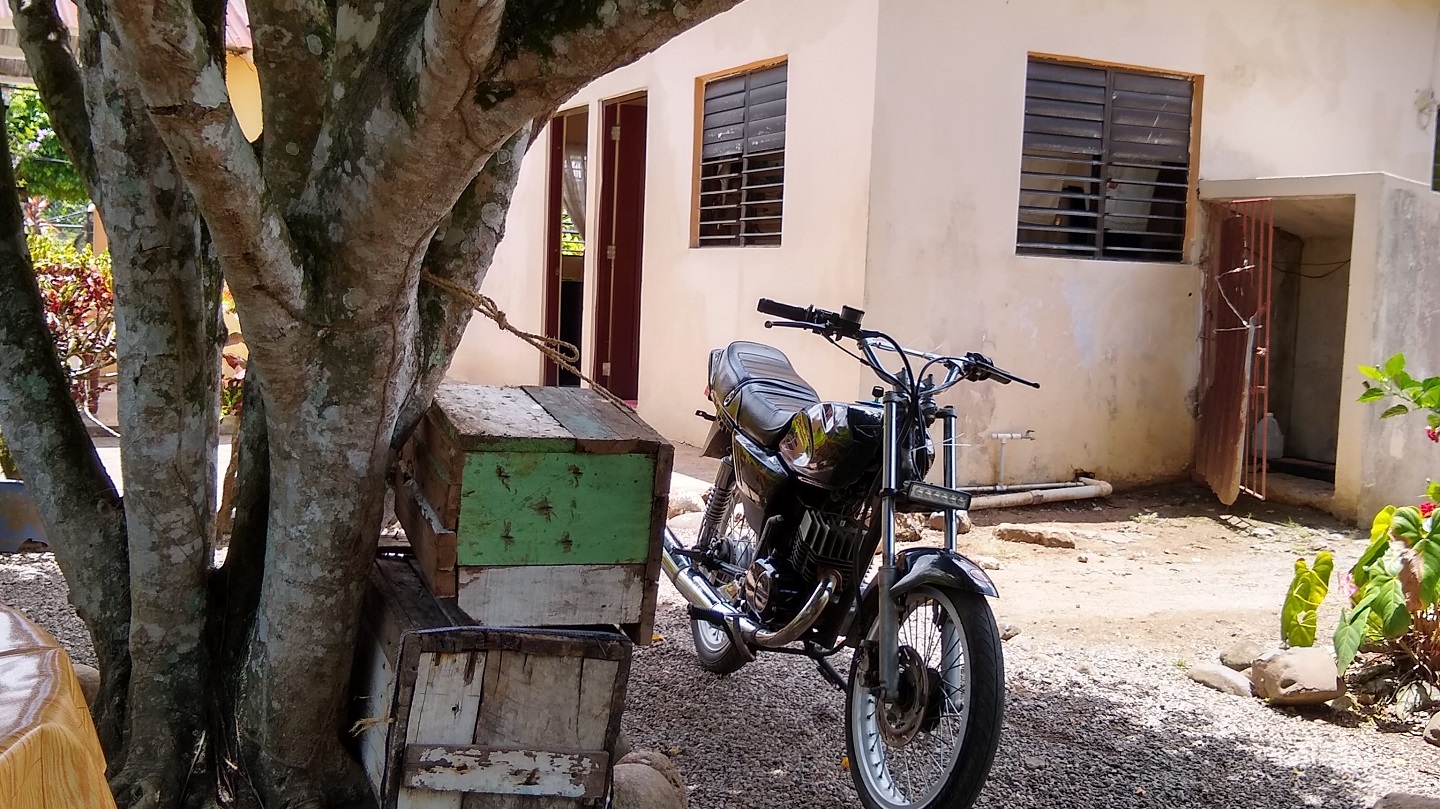 “Bean to Bar” is a concept you may have seen on your favorite chocolate wrapper. But if you live in North America, like I do, you might have trouble picturing the steps in between. Raw cacao goes through a huge transformation, and it travels a long way to do it. This summer, on a trip to the Dominican Republic to meet with our partners at CONACADO, I experienced some of that for myself.

The Dominican Republic’s National Cacao Commission estimates that the export of cacao brings $250 million a year into the country. All that cacao has to be processed, and that involves the work of many, many people. Indirectly, cacao provides 10-11 million jobs in the DR alone.

So, how do people — and cacao — get around in the Dominican Republic?

By taxi and guagua

I flew with a group of Equal Exchange staff members into Santo Domingo, a modern city with a larger population than any other metropolitan area in the Caribbean. We traveled to our hotel by taxi. During the ride, the driver explained that because the price of gasoline was so high here, he’d had his vehicle converted to add a second fuel tank for natural gas. We passed through the city’s outskirts, seeing all kinds of traffic. A couple pulled their motorbike into a parking lot so the woman on the back could stretch her legs, flip flops hanging off her toes. Two men stood calmly in the bed of a furniture truck as it drove down the highway.

For longer trips, Dominicans often travel by guagua. These are midsize passenger busses that hold about 25 people. We spotted this one picking up passengers at the airport. A sign in the window read “Quedarse atras no es morir.” Literally, that means “to stay back is not to die.” A warning for others not to follow closely?

The capital is less than a hundred miles from the municipality of Castillo.  A few days after our arrival in the Dominican Republic, we’d travel there to meet farmer members of the CONACADO cooperative’s Bloque Ocho. In some ways, this very rural area felt like an entirely separate world from the city. But we heard many stories from our hosts about the friends and family members who’d left home for economic opportunities in Santo Domingo.

By rideshare and motorcoach

To get around within the city of Santo Domingo, we used a rideshare app, just like we might have done at home in the United States. During one nighttime trip, we suddenly found ourselves staring at another set of headlights a few feet away. Another driver had ignored the one-way sign. There was no room for him to pass or turn around, but our driver stayed calm. Using only hand-signals, he helped guide the other car to reverse down the extremely narrow cobblestone street, backing around the corner into oncoming traffic. The whole situation was resolved without an accident and without any horn-honking, yelling, or recriminations — much friendlier than in Boston!

We made the trip to Bloque Ocho in a hired van with four rows of seats, tinted windows, and glacial air conditioning. CONACADO’s regional headquarters are located in Castillo. The highway that took us most of the way there was well-maintained, with two lanes in each direction. Outside the windows, we saw shaggy mountains, rice paddies and diminutive coconut trees in the fields, fresh produce stands and rugs thrown over fences to display them for sale. Our driver, Jairo, was a native of the region. This was helpful on the way to the homes of the families who generously hosted us. There, the going was rough, unpaved and badly rutted.

Several co-op members drew our attention to the quality of the roads. A few days before, when we’d visited the Ministry of Cacao in the capital, representatives there claimed that infrastructure development is a priority. But those good intentions didn’t always make it to rural areas. This is one of the advantages of being part of a farmer cooperative — this road, which passes right by some co-op members’ houses and plots, was improved recently with the help of CONACADO and fair trade premiums.

In the United States, we’ve got stereotypes about what kind of person rides a motorcycle — Hell’s Angels, biker babes and rebels without a cause. In the Dominican Republic, I saw everyone riding them. I spotted young women headed to school, uniformed police officers riding up to three on a bike, parents holding babies in their arms. At one point on the highway to Castillo, a man on a motorbike drove right toward our van, only swerving out of our lane at the last second. He had turned around to retrieve his windblown hat.

Chocolate comes from cacao, a tropical plant. Cacao pods in a rainbow of colors drip off the branches, or grow right out of the trunk! To the untrained eye, a farmer’s cacao plot can look like a patch of forest in its natural state. In true agroforestry practice, the trees don’t grow in straight lines, and they’re interspersed with many other kinds of plants — low groundcover, tall shade trees, and other kinds of food plants. In the Dominican Republic, I saw sapote and breadfruit growing alongside my hosts’ cacao — and I got to eat these fruits at their table.

Some cacao farmers live right on their land, but others farm plots that are a few kilometers away. Motorbikes are a great way to get around in rural areas. Many of the producers we met used them as transportation between home and field — including my host family. They live in Yaiba Abajo, an even more rural settlement outside of Castillo.  Here’s a picture of Papo, the grandson of my hosts, posed on an older family member’s bike.

By horse, mule and truck

Farmers are pragmatists who use the best tools for the job. The people we met in Yaiba Abajo were as adapt with a cell phone translation app as they were with a machete. It seemed to me that their lives combined some of the best of old and new. My hosts used this mule to transport sacks of cacao from the field.

Like horse enthusiasts in the U.S., my hosts’ family members kept horses for the pleasure of riding. A highlight of the visit for me was a horseback ride on a dirt path that crossed and recrossed a beautiful stream dappled by sunlight through the trees. Our hosts’ grandsons led us past neighbors’ cacao plots, a handful of truly remote homes and a small church and bank kiosk, a pen with pigs snuffling in the dirt.

But life in a rural area doesn’t always seem idyllic to teens. And growing cacao remains a low-paid occupation that demands a lot of work. One of the young men said he was learning the skills he’d need to take over farming operations one day. The other told us about his dream of leaving the Dominican Republic to live in a city far away. This dynamic — young people leaving agriculture for different job opportunities or a more urban lifestyle — is common in the Dominican Republic. And it’s common in farming communities in the United States, too. It’s called generational turnover.

CONACADO is looking to the future in a different way. Each member farmer grows cacao on their own land, but the next steps — fermentation and drying — are done collectively, to ensure that the quality of the beans is consistently high. At Bloque Ocho, this happens at a CONACADO facility in Castillo. Trucks carrying raw cacao drive right onto this scale so the load collected from each farmer can be weighed. And CONACADO is investing in a centralized factory, where semi-finished chocolate products will be produced. When these value-added products are sold, farmers will get a bigger share of the profits — and more money will stay in the Dominican Republic.

The work we do is all about exchanges. I’m so glad I got to meet people who grow cacao, learn about their lives, and travel part of the route my food takes.

Shop for delicious chocolate and cocoa products made with 100% fair trade cacao.