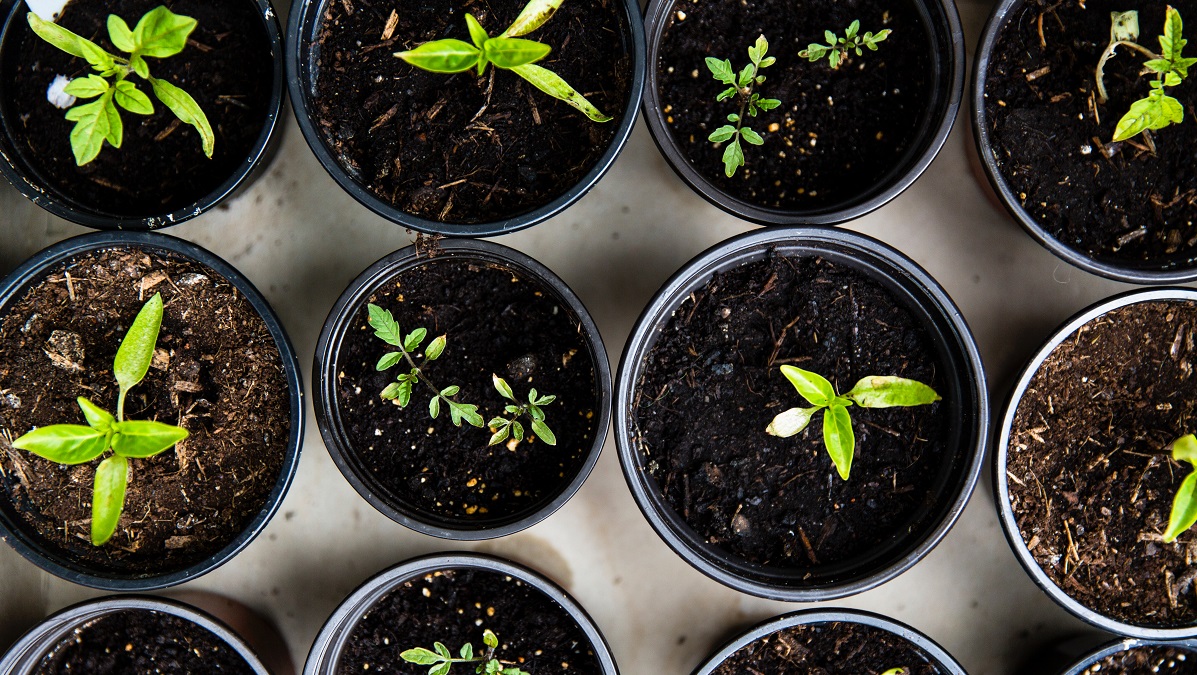 It’s a Friday morning at Equal Exchange and one day short of the official start of Spring. A truck backs into one of our loading docks. But it’s not here to take away boxes of Equal Exchange products. It’s here to pick up chaff.

“Chaff is a skin that comes off the coffee as it roasts,” said Lead Coffee Roaster Thomas Lussier. “As the coffee dries out and expands during roasting, it sheds this skin.” Each week, we produce about 30-40 tall garbage bags – about 430 pounds of chaff. That could be a lot of waste. But fortunately chaff has another use – in the garden. Coffee bean chaff adds helpful nutrients to a compost mixture, and is especially good for the growth of vegetables.

In the fall of 2008, Rodney North, Equal Exchange’s “Answer Man,” started looking for ways to distribute chaff to local farmers. Eva Sommaripa, a certified organic grower of fresh culinary herbs, cut flower bouquets, edible flowers and specialty greens, took interest. Her business, Eva’s Garden, is based in South Dartmouth, MA. They make deliveries to markets and restaurants in the Boston area and could easily pick up chaff on the trip back to South Dartmouth. “As an organic farmer she was more interested than most in making her own compost and getting an organic compost ingredient was a plus,” North said.

So since then, about once a month from early spring until fall, the Eva’s Garden truck pulls up to the dock. This week, Ted Perry is behind the wheel. Perry has worked at Eva’s Garden for two years. He’s the Technical Equipment Director, which means he oversees the maintenance and repair of all tools and machines used at the garden. He’s also heavily involved in the planting and growing aspects of Eva’s Garden, and helps manage farm projects, irrigation projects and sometimes makes deliveries to Boston. It’s after one such delivery that he’s come to Equal Exchange to load the empty delivery truck with chaff and burlap bags.

At Eva’s Garden, chaff is used in the compost mixture. “Chaff absorbs the moisture and dries the pile out,” Perry said. “It’s a great way to bulk up the compost, which in turn becomes soil used for planting.”

James Reynolds of The Dahlia Farm in Middleboro, MA, has also utilized chaff from Equal Exchange for the last year. The farm is an organic CSA producer of vegetables and cutflowers. “We’re regularly experimenting with alternative means of production,” said Reynolds. “Initially I used the chaff as a general additive to the farm’s clay-loam soil, but soon began to specifically target mulch and bedding, mixing the chaff with soil to make a lighter backfill for both leeks and potatoes – both of which require a series of stem-covering during the growing season. The chaff is a good substitute for foul bedding as it absorbs excess moisture and ammonia, which is later turned into compost.”

In organic cultivation, weeds are one of the biggest time consumers. So burlap sacks – something else we have plenty of at Equal Exchange – can be used as a suppressant for invasive root species and weeds. “[The bags] block light, so it prevents weeds from growing,” Perry said.

The bags can also be used in winter to protect things like dahlia bulbs or tulips. “You bed them down as insulation,” Perry said. They also work well in raised beds, especially with tomatoes. “Just cut a hole in the bag and put a plant in it. It retains moisture and keeps weeds from growing,” Perry said.

Don’t have access to chaff? Instead of throwing out your coffee grounds after brewing, put them in your garden! Coffee grounds are high in nitrogen, and can be sprinkled around plants, added to compost piles, or mixed into soil for houseplants or vegetable beds.

Our very own Banana Coordinator, Nicole Vitello, is also an organic farmer, and has used coffee grounds in her compost pile for years. “As an organic farmer, compost is a key ingredient in soil fertility but also in improving soil tilth,” Vitello said. “Tilth is the structure of the soil and relates directly to its ability to aerate plant roots and both hold and shed moisture. In New England, farmers often have to contend with high clay concentrations in the soil which can make it heavy and difficult for plant roots to penetrate and access available nutrients.”

Since working at Equal Exchange, Vitello has had access to a lot of coffee grounds. “I have been composting our communal kitchen waste which contains a high concentration of coffee grounds,” she said. “I also add coffee chaff to the mix as a carbon component and to lighten the amount of vegetable matter. What I have noticed most from the higher concentrations of coffee grounds is the structure of the compost. It is finer and lighter with better texture. With this composition, I feel I am not only adding nutrients to my soil by composting but also providing better structure to my soil and encouraging soil microorganisms, all elements of better tilth and ecology.”

Just like with coffee roasting, gardening is a mix of art and science!

Travel Tips from the Women of EE

Looking for travel tips from the experts? We love traveling – and it’s a big…